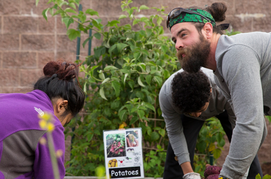 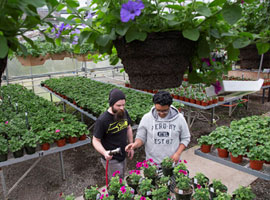 ​It's a sunny Friday afternoon and students are scattered throughout one of Lincoln High School's three greenhouses. But this is not class time. No, school let out an hour ago.

Teachers Ben Dotson and Kale Iverson move busily from one group to another, checking on progress of planting seeds, watering techniques and other necessary tasks to prepare for the upcoming plant sale.

Not only is Lincoln's sale the largest plant sale of any Tacoma high school, but with more than 8,000 square feet of growing space, it is one of the largest high school plant sales in Western Washington, according to Dotson.

"It really has become a community event; the neighbors begin to ask about it in early March," said Dotson, who is in his eighth year of teaching at Lincoln. "They really enjoy seeing what the students produce."

Lincoln has had a plant sale every year for more than 30 years running.

All funds earned help support leadership programs, including the Lincoln Outdoor Adventure Club, Lincoln International Travel Program, and a new program dubbed "Lincoln Golden Acres", an open-to-all program/club hybrid designed to get student-grown fresh vegetables to low-income families at Lincoln and the east side neighborhoods that surround it.

"We have an amazing resource in our students and our facilities to create a significant amount of fresh produce that can go to families that normally couldn't or wouldn't have access, " said Iverson, who is enjoying his first year at Lincoln, after four years at Stewart Middle School running their community garden program.

This year will be a unified plant sale and all hands will be on deck to assist community members as they peruse and select high quality agricultural products grown with love by students!